Modi protests for votes in UK:Opposition Labor Party put a picture of Modi and Johnson shaking hands on the campaign material, wrote – Stay away from them The use of Prime Minister Narendra Modi’s picture on the party’s campaign material for the by-elections in northern England has created a ruckus. In fact, the Labor Party has used a picture of Prime Minister Narendra Modi shaking hands with the leader of the Conservative Party and British Prime Minister Boris Johnson on the campaign material. In this, it has been written to stay away from the ruling MP ie the party that is friends with PM Modi. The Labor Party says that there is a risk of showing such a picture if the people there vote for another party, but the Labor Party is clear in this matter.

In
fact, the opposition Labor Party has done this to get votes through anti-Modi protests by Indian organizations as anti-India. After this came to the fore, diaspora groups have called the Labor Party ‘divisive’ and ‘anti-India’. The Conservative Friends of India (CFIN), an Indian community organization, said, ‘Dear Keir Starmer, can you explain this propaganda material and clarify whether there is a Prime Minister or leader of the Labor Party with the world’s largest democracy? Would anyone refuse to have a relationship? Is this your message to the over 1.5 million members of the Indian community in the UK? 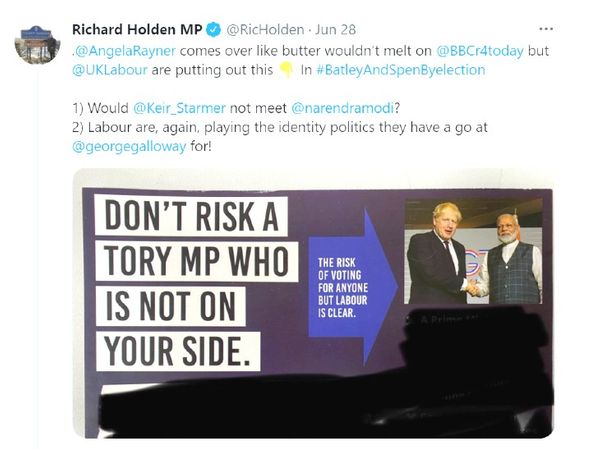 What is in the promotional material, why is there a
ruckus, Batali in West Yorkshire, UK, and by-elections are due in Spain on Thursday. The MP here is Richard Holden, who comes from the ruling Conservative Party. The opposition Labor Party has put up a campaign leaflet, which has a picture of Modi and Boris Johnson shaking hands.

This picture is taken during the G-7 summit in 2019. In it, a message has been written about Tory MP Richard Holden that people should stay away from such people. The Labor Party is seen directly opposing the Indian Prime Minister.

The MP here himself posted a picture of it
Conservative leader and Tory MP Richard Holden posted a picture of it on Twitter when he was questioned on social media whether this meant that Labor Party leader Sir Keir Starmer should be seen with the Indian Prime Minister. Shaking hands will not be seen.

There was also a protest
in the Labor Party, there is also resentment among the leaders of the Labor Party regarding this propaganda material. Labor Friends of India (LFIN) demanded its immediate withdrawal. LFIN said in a statement, “It is unfortunate that the Labor Party has used on its leaflet a photograph of the Prime Minister of India, the world’s largest democracy and one of Britain’s closest friends, at the 2019 G-7 summit.” Senior Labor Party MP Virendra Sharma has also condemned the move.

Read More: Fear of lockdown Workers leaving Dhaka to escape the brunt of the lockdown in Bangladesh, 16 crore population locked for 14 days from tomorrow